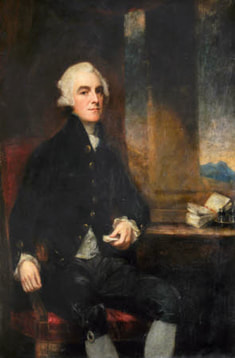 Richard Pennant, 1st Baron Penrhyn
​Gifford Pennant (1630 - 1677) was born in Bagillt. He was the grandson of Thomas Pennant the Abbot of Basingwerk Abbey in Holywell. His family was well established and well respected in the Flintshire area. Following the family tradition, Gifford joined the British Army and became captain of the horse regiment. He fought for Oliver Cromwell’s army and helped to take Jamaica from the Spanish in 1655. Cromwell subsequently offered generous land grants to business opportunists and soldiers to permanently migrate and become plantation owners and develop sugar production. Gifford Pennant seized the opportunity and soon owned the largest plantations on the island. After his death in 1677 his will stated that he had owned 7,327 acres predominantly on the south of the island in Clarendon parish.

Gifford Pennant’s son, Edward Pennant became even more successful than his father and increased his landholdings by 1,000 acres and he owned 543 slaves who worked on the sugar plantations. As one of the most successful plantation owners he was extremely well respected and became the Chief Justice of Jamaica. Despite all of their abundant wealth, the family struggled to cope in the extreme tropical climates. Many Pennant members died early from diseases such as malaria, yellow fever and typhus and were buried in the Pennant family cemetery in Jamaica. Edward himself died young at the age of 47.

After Edward’s death, his sons, John, Samuel and Henry Pennant inherited his vast estate and soon decided that the family should return to Britain, leaving their plantations and slaves to be overseen by trusted managers. Back in Britain, John, Samuel and Henry lived opulently in the centre of fashionable London Society. In 1749 Samuel was knighted and became Lord Mayor of London. Samuel died a year later after contracting typhus. Both Samuel and Henry died without having any children which meant that their brother John inherited the entire fortune.

John Pennant was a very successful West India merchant in Liverpool, Britain’s fastest growing slave port. John went into partnership with Colonel Hugh Warburton of Winnington, Cheshire whose wife owned half of the Penrhyn Estate in Bangor, North Wales. In 1767 John’s son Richard Pennant strategically married Colonel Warburton’s daughter and bought the remainder of the Penrhyn estate with his father.

Despite inheriting six large sugar plantations and hundreds of slaves after his father’s death in 1781 Richard never visited Jamaica, instead he dealt with the business from North Wales through his sugar plantation managers. From the vast records of letters and plantation documents preserved at Bangor University Archives it is clear that Richard Pennant was so far removed from the atrocities being committed to the slaves on his estates that he chose to think of them not as human beings but as assets like his cattle. As the member of parliament for the slave port of Liverpool, he was a strong anti-abolitionist and petitioned government to stop abolitionists such as William Wilberforce from removing the main source of his income. Richard was evidently more concerned about his huge profits than then the well-being of the African workers who toiled relentlessly day and night on his plantations.

From the enormous profits that arose from slave labour, Richard Pennant was able to become 1st Baron Penrhyn and build grand extensions onto Penrhyn Castle in Bangor (now owned by the National Trust). He was also able to finance Penrhyn Slate Quarry in Bethesda which was the largest quarry in the world at the time.
​
Just a year after the Slave trade had been abolished in the British colonies Richard Pennant died without any heirs which meant that his second cousin, George Hay Dawkins (1764-1840) inherited the Pennant name (to become Dawkins-Pennant) as well as Penrhyn Castle, Penrhyn Quarry and four large Jamaican sugar plantations. When slavery was abolished in 1833 the British Government awarded him over £15,000 (approximately £1.7million today) in compensation for 764 slaves that he owned in Clarendon Parish, Jamaica. 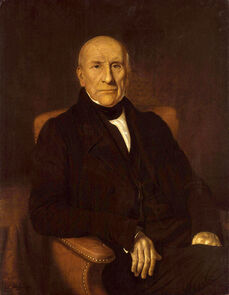 ​John Gladstone was a Scottish businessman, slave owner and Member of Parliament who owned some of the largest sugar plantations across the West Indies in Jamaica and Demerara (Guyana). He was one of the wealthiest men in Britain. He made much of his wealth through the port of Liverpool and lived there for forty-three years before moving back to Scotland in his later life. He was the Chairman of the West India Association. He used his son, William Ewart Gladstone’s powerful political career to further his own business interests by opposing the abolition of slavery.
The Demerara Rebellion of 1823 was one of the largest peaceful protests against slavery. It was organised by Jack Gladstone, a black slave who had been given the Gladstone surname like many others who were owned by the estate. The rebellion was brutally crushed by the British military. This fight for freedom was one of many hundreds that eventually led to the abolition of slavery in 1833.

After slavery was abolished in 1833, John Gladstone received the largest amount of compensation from the Slave Compensation Commission: - £106,769 (approximately £12 million today) in compensation for the 2,508 slaves he owned across their nine plantations in the West Indies.
​
John Gladstone was one of the leading figures behind the creation of the Indian indenture system in the West Indies which replaced African enslavement. He and others instigated the importation of indebted Indians to the British colonies of Mauritius, Guyana, Trinidad, Jamaica, Fiji and South Africa to replace the African slaves there. This was done under false pretences; that decent wages, good housing, food, education and medical care would be provided. However, the reality was very different. Once over there the labourers received no wages and working and living conditions as well as treatment from the plantation overseers and managers were just as cruel as it had been previously for the African slaves. The predominantly Indian indenture system resembled slavery in every way except name. 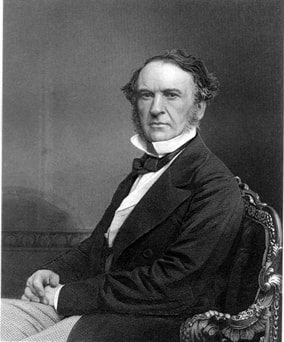 William Ewart Gladstone was John Gladstone’s fourth son. He was born in Liverpool and married Catherine Glynne who was the daughter of Sir Stephen Glynne, 8th Baronet of Hawarden Castle. The Glynne family were a very wealthy Flintshire family. William and Catherine were married for 59 years. William and Catherine lived in Hawarden for most of their marriage and they had eight children. Their eldest son, William Henry inherited the Hawarden estate. It is likely that some of the money made from slave labour on his father’s West Indian plantations was invested in the estate.

William was the Prime Minister of Britain for four terms (12 years) during 1868 to 1894 and he was a parliamentary politician for over 60 years. He had a huge influence on Britain and its policy towards the colonies.  He entered parliament in 1832 as a Tory member and in 1846 joined the Peelite faction under Robert Peel that endorsed free trade. In 1859 the Peelites merged with the Radicals to form the new Liberal Party.

Many of Williams’ political beliefs were shaped by his father’s business interests, being the largest slave owner in the West Indies. Father and son were both opposed to the abolition of slavery but were in favour of the abolition of slave trade as they believed the influx of cheaper slaves brought from Africa would reduce the value of their own plantation slaves who were reproducing their own children straight into slavery.

The Gladstones could see that they could not stop the inevitable abolition of slavery, so instead they tried to get a few extra years free labour out of their slaves by arguing in favour of their apprenticeship whilst simultaneously working on the experimentation of Indian Indenture in the colonies as a means of replacing their African slaves as workers.

During an Oxford Union debate in 1831 Gladstone moved an amendment in favour of “gradual manumission (release from slavery) along with better protection for the personal and civil rights of the slaves and better provision for their Christian education”. His early Parliamentary speeches followed a similar line: in June 1833, Gladstone concluded his speech on the ‘slavery question’ by declaring that though he had dwelt on "the dark side" of the issue, he looked forward to "a safe and gradual emancipation".

In a speech he gave in Parliament in 1832 William stated that moral emancipation should come from education and teaching them "honest and industrious habits" then "with the utmost speed that prudence will permit, we shall arrive at that exceedingly desired consummation, the utter extinction of slavery."

William inherited his father strong Christian paternalistic beliefs and used it to justify the continued use of Africans on their plantations for an extra 5 years as apprentices.  He claimed that the slaves needed to be “civilised” and made into upstanding citizens before they could be freed into society.

In 1857 a catastrophic fire in St Deiniol’s Church in Hawarden destroyed the main roofs, organ and much of the main church fittings which had just a year before had extensive restoration work. As parish members and devout Christians William and his family attended the church regularly. The family donated £6,000 towards the restoration fund.

At the grand old age of 85, William Ewart donated 32,000 books and £40,000 (approximately £4.65 million today) towards to the construction of St Deiniol’s Library in Hawarden. 5,000 of the books donated were brought down from his father’s Fasque estate in Scotland in 1851. In 2010 the library was renamed the Gladstone Library as part of the bicentennial celebrations of William Gladstone's birth. In 2020 a petition to change the name of the Gladstone Library back to its previous name of St Deiniol’s, due to William Gladstone's links to slavery was met with a counter petition to keep the current name. The counter petition currently has more supporters than the petition to revert back to the old name.

Other Flintshire slave owners claims for compensation in 1837

Apart from wealthy families like the Gladstones and Pennants there were many “ordinary” middle-class Christian clergymen, women and men from Flintshire that owned slaves as well.

One such person was Mary Strudwick who inherited Pantre Pant sugar estate and its slaves in Trelawny Jamaica from her father. Her husband, Rev. George Warrington was the vicar at the Church of Saints Cyngar and Cynfarch, Hope (Flintshire) from 1778 till his death in 1830.  Around 1790 the Warrington family sold the estate, including more than 100 slaves for £3,000.

1. Hon. George Neville Grenville - Rector of Hawarden (c. 1814- d. 1834) He would have certainly have known William E. Gladstone as they lived in the same parish. George made many alterations and additions to the Rectory building. He owned 379 slaves in Jamaica St Andrew (Hope Estate) and was awarded £6,630 5S 6D

2. Rev. Benjamin Winston (formerly Sandford) – From Bodannerch, Rhyl. He inherited his grandfather, Charles Winston's surname as well as his two sugar estates and slaves in 1802. In 1823 he owned 179 slaves on his Bath and Rose Hill estates in Dominica.  In 1832 (a year before slavery was abolished) the total had fallen to 144 as six slaves had escaped and were presumed dead.

4. Jane Rowland – From Mold, she owned 28 slaves in Jamaica Port Royal (Chatworth) and tried to claim £630 but settled the matter out of court.