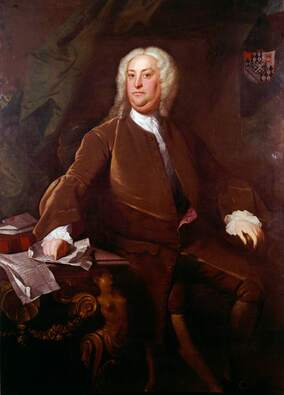 Thomas Patten came from a rich English merchant family that had made their wealth from trading in   tobacco and sugar produced by white indentured labourers and African slaves in the 17th century. In 1690 the Patten family invested some of the profits they had received from slave made commodities into copper and brass manufacturing in Bank Quay, Warrington.

In 1743 at the age of 44, Thomas decided to branch out with his partners to form The Cheadle Brass & Copper Company in Staffordshire. Up until this period all of their copper ore was bought by boat from Cornwall and Ireland.

It is believed that a Holywell man Thomas Barker, a business partner of Thomas Patten’s Cheadle Company introduced him to the potential of establishing copper and brass industries in Greenfield Valley. He also recommended using Greenfield Docks to transport manufactured goods through the lucrative rising slave trading port of Liverpool, which was just a short distance away.

In 1755 Thomas Patten established the Warrington Company which operated the first copper battery factories in Greenfield. By 1765 he had opened the Battery Pool and four brass and copper mills which were the largest mills in the valley. The mills were “plating and rolling copper for making and finishing all sorts of work in copper for the coppersmiths to work into vessels of any kind for export”. He manufactured copper manillas and ingots which were used as currency with the African tribal kings in exchange for slaves.

Copper and brass were rare precious metals in Western African countries like Nigeria. The ancestors of the Edo people from modern day South Nigeria produced ornate Benin Bronze tablets (made from brass) that were mounted in the Royal Palace of the rulers of the kingdom of Benin. It is possible that some of the copper and brass from Flintshire were made into some of what has now become known as the Benin Bronze tablets. Most of the Benin Bronzes were later looted by the British during the Scramble for Africa from 1885 and can now be found in private collections and museums like the British Museum. Today there is an ongoing debate about whether to return the Benin Bronzes back to Nigeria to be displayed in a dedicated Edo Museum of West African Art.

Thomas Patten also made copper stills which were sold to sugar plantation owners for slaves to boil sugar cane juice and molasses to make rum. When Thomas Patten died in 1772 the Warrington Company’s lease in Greenfield Valley ran out and a new business consortium headed by a Welshman, Thomas Williams was set up. 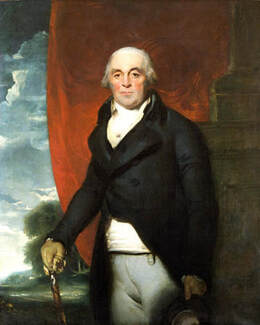 Thomas Williams was nicknamed “The Copper King” he was the son of a humble Anglesey farmer he later became an astute lawyer, a ruthless businessman and an influential Member of Parliament. In North Wales alone he was a managing partner in the Parys Mine Company, Mona Mine Company and Greenfield Copper & Brass Company. In the late 18th century he became the wealthiest and most influential man in Britain.

Thomas William was from Llanidan, Anglesey. The story goes that in 1774 he came across a drunken local man, Pugh who was talking about finding a new supply of copper ore on Parys Mountain in Amlwch, Anglesey. Williams supposedly bribed Pugh to keep quiet about his discovery with a gold sovereign, a bottle of brandy and the offer of rent-free accommodation in his cottage for the rest of his life.
​
Williams very quickly went into partnership with Reverend Edward Hughes, who owned that part of Parys Mountain and the Parys Mine Company was born. At its peak the Parys Mine Company employed 1,500 miners. Reverend Edwards became so wealthy from the copper business that in 1786 he built Greenfield Hall and Kimnel Hall, which was so lavish and luxurious it was known as the “Versailles of Wales”.

Williams also invested heavily in the Mona Mine Company which was located on an adjacent part of Parys Mountain. He became business partners with Henry Bayley, 9th Baron Paget, Lord Lieutenant of Anglesey and Earl of Uxbridge who inherited the Plas Newydd estate on Anglesey (now a National Trust building). From the enormous profits made from the copper industry, in 1784 Henry Baylis employed renowned English architect James Wyatt to make grand neo-Gothic style extensions to Plas Newydd including an octagonal tower on the south-east corner.

Just a year after setting up the Parys Mine Company Thomas Williams saw an opportunity to increase his companies’ profits even further by smelting the copper ore and manufacturing his own copper and brass products. With investment from other prominent business partners, he was able to take over Thomas Patten’s mills in Greenfield Valley and he established the Greenfield Copper and Brass Company.
According to a trade directory from 1790 the Greenfield Copper and Brass Company owned two copper rolling mills, a brass making works and foundry, a brass battery mill, a copper wire mill and copper forge with hammer mill.

The company was so successful that Thomas Williams was at the forefront of the industrial revolution. He dominated the manufacture and sale of copper and brass products made specifically for the African trade. Guinea rods, copper manillas (bracelets), copper ingots (bars), copper trinkets and brass neptune (bowls) were all made in Greenfield valley and were used as currency to buy millions of slaves.

In 1776 Williams built the Battery Works in the valley which produced brass pots and pans which were sold in Africa in exchange for slaves and other goods. White plantation owners in the Americas and in the West Indies also bought the pots and pans for their slaves to use to cook their own food in the basic dilapidated shacks they were forced live in, on the plantations.

The most profitable copper items that Thomas Williams produced in Greenfield Valley and transported to Liverpool via Greenfield Docks were made in his rolling mills and the Abbey Wire Mill. Copper sheeting, copper alloy bolts and nails, that Williams had invented clad the bottom of wooden ships to prevent the tropical teredo worm from destroying them.

Most merchant fleets carrying slaves, tobacco, sugar, cotton and other goods were clad with Flintshire made copper sheets and bolts including the East India Company ships. Almost all Royal Naval ships that helped defend and expand the British Empire were “coppered”. In 1780 Lord Nelson’s famous battle ship, HMS Victory was the first naval ship to be coppered with 3923 copper sheets, each measuring 4 feet x 14 inches. Lord Nelson believed that the copper helped his vessels win the Battle of the Nile in 1798 and the Battle of Trafalgar in 1805 as it gave them better manoeuvrability against the French and Spanish navies. Greenfield Valley Heritage Park Museum has two of the copper sheets from HMS Victory on display.

In 1799 Thomas Williams’ agent, based in his office in Cornhill, Liverpool reported that the company had clad 105 ships and repaired 33. That same year the British Navy contracted the Greenfield mill to supply 25,000 bolts per week weighing a total of 4 million pounds. At the time the market price for the bolts was 14 pence per pound of weight (approximately £21 per pound today).The main reason the copper sheeting and copper alloy bolts were so popular was because they made the wooden vessels they clad more durable and profitable. Thomas Williams went before a Parliamentary Committee in 1799 claiming that a 350-ton merchant ship made in Liverpool had completed 16 round trips from Britain to Africa and the West Indies needing minimal repairs costing no more than £55 due to the copper cladding. He stated that any similar vessel without the copper lining would not have been able to complete 11 round trips and the repair costs would have come up to over £2000.

Not content with the fortune he was making with the copper products mentioned already from 1787 in Meadow Mill, Thomas Williams also produced copper rollers engraved with patented patterns to be printed onto cotton textiles on calico and muslin textiles. He sold these cylinders to Flintshire industrialists from The Mold Cotton Company as well as countless others across Lancashire and Manchester.  Thomas Williams really did have his finger in every pie!

By 1787 Thomas Williams’ companies had become so large he employed hundreds of people in his mines in Anglesey and mills in Greenfield Valley. He needed to pay his employees’ wages but due to the shortage of small coins minted across Britain, Thomas Williams had his own penny and halfpenny tokens made by Matthew Boulton from Birmingham. These were made with his own copper, which were known as Druid tokens. As Thomas Williams had copper businesses across Britain his tokens were accepted in most major towns and cities, like Liverpool, London and Anglesey. The tokens could be used in exchange for everyday essentials like food and clothing.

It is fair to say that had it not been for the development of the copper industry in the Greenfield Valley from 1770s, Liverpool would not have become one of the richest port cities in the world. Liverpool was at the centre of the triangular trade, importing and exporting human cargo alongside goods grown by slaves across the colonies.

It is not surprising that with so many links to the slave trade Thomas Williams was at the forefront of the anti-abolitionist movement along with other powerful industrialists in Flintshire and Liverpool. In 1788 he claimed that he had invested £70,000 in the trade and he signed a petition stating that the abolition of slavery would destroy his business and he would lose its main source of revenue from the copper and brass industry.
​
Thomas Williams had become so powerful and devious that he and his business partner John Wilkinson (Iron mad Jack) took control of national copper prices from the Cornish cartel who had previously dictated the metals’ value. This success did not last long as within five years of Thomas Williams death in 1802 the price of copper collapsed and the local deposits of copper ore in Anglesey started to run out. 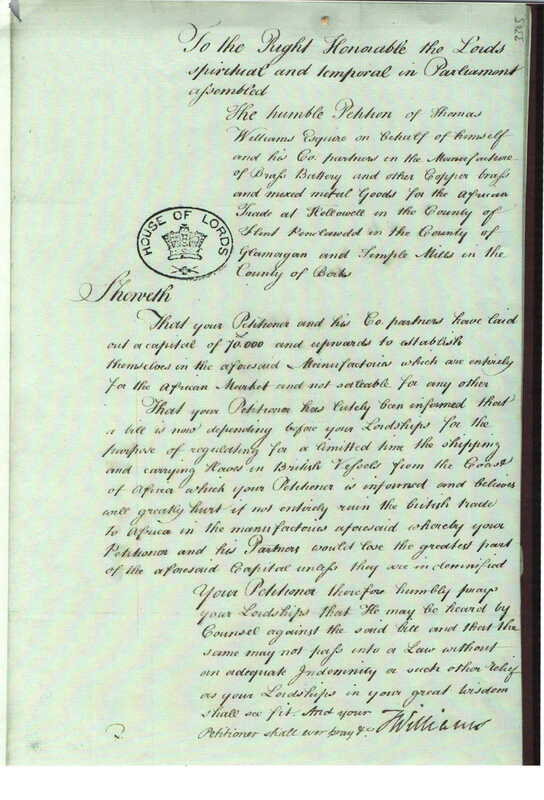 Thomas Williams' petition against the abolition of slavery. By kind permission of the Parliamentary Archives
References