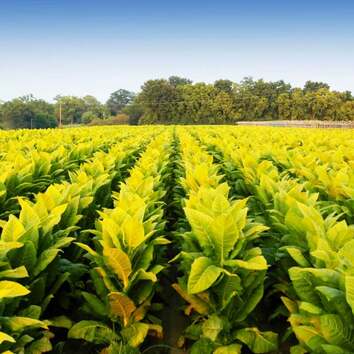 Tobacco field
History of Tobacco
​
Tobacco was first grown by the English on a large scale in the Virginia colonies from 1607. Native Americans had introduced it to European merchants who travelled in search of gold and other riches in the 15th century. For thousands of years the indigenous people of America had smoked and ingested tobacco for medicinal, spiritual and social purposes and it was used as an important trading good between tribes.
In Europe, those who could afford this new drug soon became addicted to its nicotine properties naturally found in the dried leaves and demand for the product began to increase rapidly.

In order to grow tobacco, the colonists needed a large cheap source of labour. In the 17th century in England, Wales, Scotland and Ireland there was an abundance of poverty-stricken people who were unable to find agricultural work and who had turned to petty crime in order to feed their starving families. The Virginia Company was given permission by King James I and his government to transport these poor men, women and children under the age of 25 to the New World and to use them as indentured labourers under the pretence of teaching them new skills or trades. After completing their indenture contract (normally seven years or until they reached the age of 18) they would it was promised, be given their freedom and 50 acres of land to farm and settle over there.  However, the reality was that most died before they ever saw freedom.

It is estimated that from 1607 to 1700 more than 300,000 young white people were forcibly taken and made to work and live in appalling conditions in the colonies. The indentured servants were underfed and often beaten and tortured for not working hard enough or for trying to escape. Many died from typhoid, dysentery, malnutrition and other diseases on the journey to America as they were loaded onto cargo ships like animals and chained below deck to stop them from escaping. Those that did arrive in the new colonies didn’t survive for very long and died from exhaustion, malnutrition, tropical diseases and torture. Many of the new colonies and plantations were attacked by indigenous tribes who wanted to free their fellow tribesman who had been enslaved by the English and forced to work on the plantations alongside the other indentured workers. The Native Americans also fought the English colonists to claim back the land that had been stolen from them. Consequently, there were several devastating massacres in which the native people killed the majority of the colonists and their workers.

Growing tobacco was an extremely arduous job and as the supply of white indentured labourers was not sustainable, new sources of cheap forced labour were brought to America from Africa. By the 1700s the number of African enslaved people had massively overtaken the white indentured population and racial differences were being used to discriminate against non-white people. Black slaves were enslaved for the duration of their lifetime and their children were born into slavery. Tobacco was in such high demand in the 17th and 18th century that there were plantations spread across the Southern states of America. In 1775 (the same year as the American Revolutionary War began) Virginia and Maryland exported over 45million kilograms of the dried tobacco leaves valued at $4million (approximately £100million today). The tobacco was packed into large wooden barrels called hogsheads (each weighing 450 kilograms) and shipped across to Britain.
​
Flintshire's Tobacco Mills

In the 1740s Edward Jones built the first snuff mill in the Greenfield Valley he was soon followed by Peter Parry who built two more tobacco mills in the same area. Snuff was crushed dried tobacco leaves that were inhaled through the nose to give a short sharp hit of nicotine to the user. It was often blended with other flavours and was sniffed in small pinches to revive oneself or to disguise rancid smells from open sewers and rotting rubbish left on the streets. Snuff became very fashionable and popular amongst the middle and upper classes.
​
Little is known about how successful Jones and Parry’s businesses were but it must be assumed that they both earned enough profit to warrant the construction of three mills within the valley. All the tobacco would have been grown by white indentured workers and black enslaved Africans and then shipped from Virginia to Liverpool and Greenfield Docks.

Enslaved workers in a tobacco field

Archaeologists discovered fragments of pottery produced around Buckley Mountain between 1640 and 1720 in Virginia and North America. Due to the access to a variety of clays, coal and lead pottery production has been associated with the town of Buckley, in Flintshire for over 600 years. By the early 17th century, a new wave of cottage potters settled in Buckley and began to make a broad range of ceramics. Scholars are unsure if the pottery was part of the Triangular trade from Liverpool or whether the pieces were just used by the merchants and plantation owners on the slave ships and the tobacco estates. It is most likely that the white and black servants working in the plantation estate houses would have used the pottery daily to serve their owners and their families’ tobacco filled pipes, tea, coffee, butter and other foods.

Since the 1950s two main kiln sites have been discovered by archaeologists:-

1640-1720 – Brookhill Pottery had 12 kilns but no evidence was found to identify the potters' names. Archaeologists were able to identify where the pottery came from due its traditional decorative style of lead glazed coarse clay earthenware with a marbled red and thick black glaze. Fragments of tobacco pipes, butter pots, milk pans, tankards, decorative sgraffito, combed and clip tailed wares and large tripod cooking vessels were uncovered in North America.
​
1690-1720 - Pinfold Lane pottery had a distinctive style different from that of Brookhill.  It consisted of a wider range of press-moulded wares and its bowls had a single wave slip around the rim. Both Pinfold Lane and Brookhill pottery used the same techniques to produce large collections of black glazed ceramics with a marbled paste.

​The Flintshire area developed rapidly during the Industrial Revolution due to the African slave trade, industries in copper, brass, iron and cotton which brought in huge profits that were invested in the building of local roads, taverns, inns, shops and rented housing owned by mill owners for their workers including Bryn Celyn, Panton Place, Pen-y-Ball Street, Battery Row and Tai Coed. The population of Flintshire grew as more work became available. Many workers came from England and Ireland and moved to the area.

The legacy of enslavement in all its forms has led to the dispersal of many different cultures across the world. All of us are the products of the British Empire in some shape or form. The poor were exploited in pre-Industrial and Industrial Britain, others were transported thousands of miles away from their families and communities and then divided into racial categories and made to feel more superior or inferior based on nothing but colour. The system of racism was a colonial construct that was used by the middle and upper-class plantation owners and governments to stop the masses from gathering together to fight for their right to freedom and equality.

However, despite this oppression many of those enslaved rose up against their abusers and fought for their freedom through direct action or by educating the British general public about their plight.

In celebrating the abolition of slavery, one must not forget their efforts. It is unfortunate however that the campaign for abolition was not strong at all in Flintshire. While this was primarily due to the vested interests of its rich industrialists who were political leaders it did not perhaps represent the true sentiments of the local population who were similarly enslaved in their mines, mills and factories. 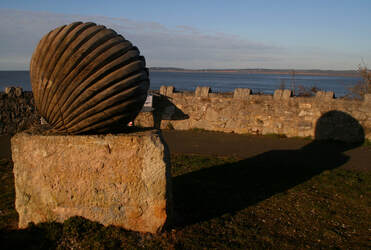 Shell sculpture at Greenfield Docks
The various industries in Greenfield Valley had a devastating effect on the local environment along the Hollywell stream and down into the River Dee. Before the influx of industry in the 1740s Holywell had been a sleepy picturesque town with a small agricultural population that only increased when pilgrims came to St Winefride’s well for its spiritual and medicinal healing powers. Thomas Pennant described the area from St Winefride’s as being “along a narrow but deep valley, bounded on one side by hanging woods. In former times the sacred stream hurried to the sea unconfined by the busy manufactures.”

Large oak trees could be found in Flintshire and wildlife and sea life were abundant in the river Dee including white owls, buzzards, kestrels, kingfishers, ducks, swans, natterjack toads, cockles, mussels, plaice, flounders and salmon to name but a few.

The Dee is very important for wild life and especially the birds that over-winter there, there are nature reserves and parts of the river are Sites of Special Scientific Interest and of international significance. The Dee is therefore still a river of international importance and its unique environment connects it to the wider world – in which Greenfield harbour still plays a small part.

Some of the local wildlife and sea life have now begun to recover despite industrial waste being washed down the River Dee over the centuries. The environment agency and local Flintshire Council are working very hard to keep the environment clean but now it is up to all of us to protect this beautiful lush area for future generations.
References